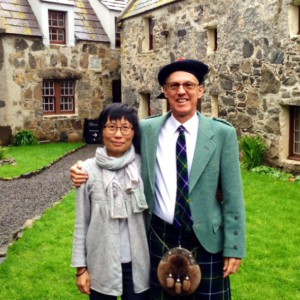 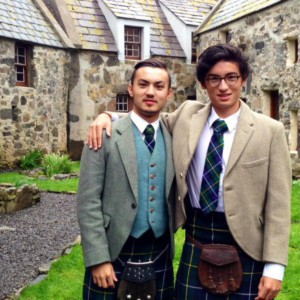 Past Chiefs of Barra

41st Chief: Roderick “The General” Baron of Barra, lost the Barony and the  Estate of Barra in 1838. Married to  Isabella  Brownlow. Died 1863 (when the Chief died, the chieftainship passed to a cousin, descendant of Gilleionan, who had emigrated to Canada in 1802)

45th Chief:  Robert Lister MacNeil, Baron of Barra, an American who bought the Barra Estate in 1937 and restored the Castle. Died 1970

46th Chief: Ian Roderick MacNeil, Baron of Barra. Born in the USA, he was a Harvard educated Professor of Law. He gifted Kisimul Castle to Historic Scotland for 1000 years in 2001, and gifted the Estate of Barra to the Scottish Ministers in 2004. Married Nancy Wilson of Ottawa, Canada. Died 2010.

If you have genealogical ties to the surname Macneil or any of Clan Macneil’s Sept family names (listed below), you were born into the Clan Macneil.  If you are not a member at present, our Association would be delighted to have you join us as a member by clicking on Membership Application above.  If you are a current member who needs to renew his/her membership, click on Membership Renewal above.

The island’s place name is derived from two elements: Barr and Old Norse ey (“island”). It is possible that Barr represents the Gaelic personal name Finnbarr. Other possibilities are that it instead represents the Old Norse elements berr or barr (“bare” or “rough”), or perhaps the Celtic element *barr (“top” or “peak”).[9]

In 1427, Alexander, Lord of the Isles granted the island to Giolla Adhamhnáin Mac Néill, a member of Clan MacNeil.[10] The clan held the island until 1838, when Roderick MacNeil, sold the island to Colonel Gordon of Cluny. Gordon expelled most of the inhabitants in order to make way for sheep farming. The displaced islanders variously went to the Scottish mainland, Australia, New Zealand, the United States and Canada. Barra was restored to MacNeil ownership in 1937 when the Barra estate, which encompassed most of the island, was bought by Robert Lister Macneil.

In 2003, the ownership of the Barra Estate was passed by the owner, Ian Roderick Macneil, to the Scottish Government. The estate can be transferred to the inhabitants in the future, at their request. Macneil had previously transferred Kisimul Castle to Historic Scotland in 2000.[11]

In May 2007 Channel 4‘s Time Team came to the hamlet of Allasdale to investigate the exposed remains of Bronze Age burials and Iron Age roundhouses in sand dunes that had been previously uncovered by storms. The programme was broadcast on 20 January 2008.[12]

The Dualchas Heritage and Cultural Centre is located in Castlebay, next to Castlebay Community School. It has various exhibitions annually, and is open throughout the year.[13]

Barra has an oceanic climate, with mild temperatures year round. 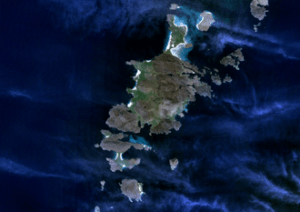 The area of Barra is roughly 60 square kilometres (23 sq mi), the main village being Castlebay (Bàgh a’ Chaisteil).

The west of the island has white sandy beaches backed by shell-sand, machair and the east has numerous rocky inlets.

Kisimul Castle at Castlebay is located on a rock in the bay, so giving the village its name. A smaller castle can be found in the middle of Loch St Clare on the west side of the Island in Tangasdale.[citation needed]

The highest elevation on the island is Heaval, halfway up which is located a prominent white marble statue of the Madonna and Child, called “Our Lady of the Sea”, which was erected during the (Marian year) of 1954. The predominant faith on the island is Catholicism and the Catholic church dedicated to Our Lady of the Sea is immediately apparent to all who arrive into Castlebay.[7]

Other places of interest on the island include a ruined church and museum at Cille Bharra, a number of Iron Age brochs such as those at Dùn Chuidhir and An Dùn Bàn and a range of other Iron Age and later structures which have recently been excavated and recorded.[citation needed]

Recent Articles posted by members from all over the world.