The build up to World Camps 70.3 continues ! by Julie (Mc Neal) Rossouw of Dubai

Home The build up to World Camps 70.3 continues ! by Julie (Mc Neal) Rossouw of Dubai 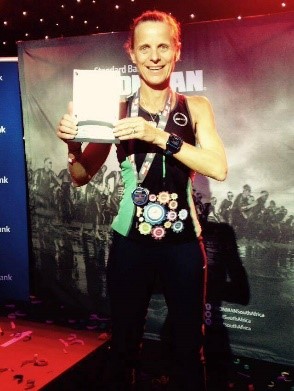 The buildup for 70.3 Durban on the 19th June went exactly to plan. Although it was tough with the weather becoming increasingly warmer in Dubai and the start of Ramadan, limiting our hydration, having a training partner made it so much more enjoyable. Noel was travelling a lot, so I needed another training partner to keep me going. Choosing your training partner is very important, someone of similar or stronger ability to push you a bit harder, someone who will not question or complain at the heavy training load and early morning sessions. Finola was perfect. She was new to the 70.3 triathlon world, eager, enthusiastic and always there for a training session, without question. She had completed her first Ironman Bahrain 70.3 in December 2015, hooked, she signed up for the Ironman Dubai 70.3 in January and without any hesitation signed up for Ironman Durban 70.3 when she heard we were going! Being a mother of 2 and having a full time job makes juggling her commitments and training a bit more of a challenge for her. To compromise I would get up at 3.30am at times to ensure we completed a session before work. Trying to fit in run, swim and bike sessions is an art in itself, when you then try and add gym and stretching to the mix training can become overwhelming. In order to maximize time we can include the strength training in our main sessions. Using a pull bouy in swimming works the upper body and running hills substitutes for a leg strengthening session. I did enjoy including one session of pilates a week, which helped stregthen my weak core.

Training went well, we survived the heat and humidity of Dubai to arrive in Durban, fit, healthy and strong. Race prep could not have gone any better. No injuries and no ailments…an athlete’s dream.

The weather in Durban was cold and the sea water temperature below 23 degrees C, which meant a wetsuit swim, but a wetsuit swim is always a bonus for the weaker swimmers like us, so we were not complaining. We registered and headed to the beach for a swim. Finola was not as comfortable in open water and the threat of big swells, currents and sharks did nothing to dispel her fears. I guess I did play on that one a bit, nice friend right! We arrived at the swim venue only to find that the sea was too rough to be safe and so no swimming was allowed. Finola managed to rip her new wetsuit (which she had borrowed from her sister) in the process. We headed back to the Ironman village to purchase a new one. Purchase complete we were ready to relax for the day. I had read that bike racking was at 4.45pm for us so we had all day to relax, eat and hydrate.

At 4.45 we headed down the lift, only to be told by another athlete that the bikes had to be racked by 5 and they would be closing transition. Panic mode set in, how could I have made such a rookie mistake….Noel broke all world speed records to get us to transition and as we sprinted to the check in with bikes, helmets and transition bags flying we were advised transition was closed, I was ready to beg and plead, but a very accommodating gentleman felt sorry for us having flown all the way from Dubai, and let us in. Needless to say I blamed the other two for not checking the racking times and leaving it all up to me. Something they will never do again!!!

We were awake bright and early on race day. A quick breakfast and we headed off to the transition area to do last minute bike check. Finola had a flat so we took the wheel to the bike mechanic who managed to replace the tube in no time at all. The announcer had begun to mention that the sea swells and currents were still bad and they made a call to cancel the swim for the age groupers. Everyone was devastated. This was the 3rd race for Finola where there was a change to the event. Bahrain & Durban 70.3 had cancelled the swim and Dubai 70.3 had a shortened swim in the harbour area. I was beginning to think Fin was a jinx. However, once the pro’s had started and we saw how they were being swept out with the current we were all very thankful that we were not subjected to the rough seas and strong currents.

The race eventually got under way for us and my bike and run went very well. Consistent training pays off and although I was tired by the end of the run I felt great. Third place in my category felt good, little did I realize that the girl in second place was only 25 seconds ahead of me, if only I had worked a bit harder on the run, but that’s racing.

After a few days relaxation in South Africa we headed home. We had 11 weeks to World Champs in Australia. This time the training was not going to go as planned, it was very disruptive and inconsistent. Noel and I headed to Costa Rica for our son’s wedding and we thought it was going to be ideal running and swimming weather. We did not take getting sick into consideration.

We managed a few beautiful runs along the coastal road in Pavones, before the dreaded flu took its hold. I was unable to train for the next 10 days and the jet lag did not help recovery once we were home. After a week in bed I managed to struggle through a couple of runs and swims. This was not how training was meant to go. But the body had spoken and there was not much I could do other than rest and recover.

World Champs is now 2 weeks away and training as been anything but ideal. So it is time to rethink the goals and focus on what is realistic, rather than what I would like to achieve. Triathlon is our lifestyle choice, but this does not define who we are, so whatever happens on the day, I will still be the same person after the event as I was before. I am hoping that the muscles have retained some memory and will know what to do on the day!

Plan A: To Enjoy the experience
Plan B: To have fun
Plan C: Both the above

Final long cycle completed and feeling excited at the amazing opportunity to qualify and take part in the Ironman 70.3 World Champs for the 4th consecutive year.

If you have any comments or suggestions we would love to hear from you. Please send emails to julie.rossouw@concordiadubai.com